The Little Mermaid on Broadway

Well, another Puppet Heap creation hits the planks on Broadway at the Lunt-Fontaine Theater for Disney’s stage production of “The Little Mermaid” opening November 4th. It’s a brief appearance, but we think audiences will get a kick out of it. We had to make a little puppet version of the Sebastian character which pops out of a covered dish during a chase scene with the chef. It’s one of those ideas that’s borderline creepy, so it was a real challenge to keep it light. In the end, the project is another great example of a talented team coming together to make something great. 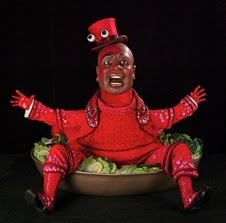