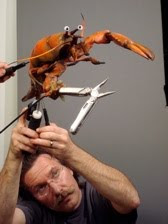 Now that the website has officially launched, I guess I can tell you all about Leatherman’s Bionic Lobster. Just about everyone in our industry is walking around with a Leatherman Tool in his/her back pocket, so the opportunity to do something with the company was irresistible. We had a great time working with Stick and Move (the ad agency), Transistor Studios (production company), and Pete Rosch (director.)
To the right is the famous Jim Kroupa who performed the lobster and assisted with the build.

Due to time and budget constraints we basically built this puppet by cannibalizing and mechanizing a whole bunch of those cheap plastic display lobsters. We also altered a bunch of Leatherman tools to snap open and fan out. That’s Louay Assaf (above,) lead lobster builder and a great puppet-man.

Two Bionic Lobsters were made--one a performable puppet, and the other a posable stunt version.

Did I mention we performed with real live lobsters? 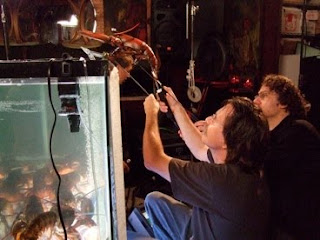 The whole thing was shot at Maracuja Bar in Brooklyn, owned by Charlie, the most patient bar tender in the world. They dressed the place up to look like a seafood restaurant. Since it was a bar, we had to start the shoot at 3 am to avoid interfering with business hours. We were all very tired. 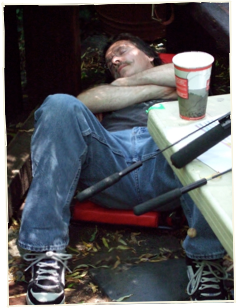