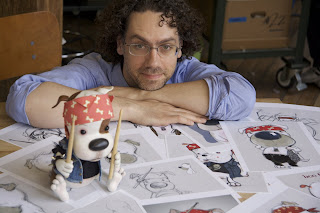 The new children's television program Bookaboo bursts onto the BBC television screen next Monday March the 2nd. Bookaboo and his band mates were designed by our very own art department and fabricated right here at the Puppet Heap Workshop.

Bookaboo is what scientists call a "rock puppy" who simply can't play his next big concert gig until his unrelenting quest for stories is satiated. This problem is remedied each week by a celebrity reader who sits down with the little pup and spins him a yarn from a featured picture book title.

The series was concieved by Lucy Goodman of Happy Films UK and will feature such guests as the inimitable Meatloaf, ex-spice girl Mel C, and footballer David Seaman.

We have been lucky enough to watch a few episodes here in the workshop and are very excited about the launch of this new show in the UK! Good Luck Bookaboo!!
Posted by The Heap at 6:14 PM