We would like to congratulate Puppet Heaper James Godwin, who has recently joined Henson Alternative's Stuffed and Unstrung Off-Broadway (for two weeks as of May 26th) -- we would also like to congratulate Heaper Melissa Creighton, who performed in the show last night.

"After just the first few moments of watching...or rather..interacting with the puppeteers of Stuffed and Unstrung, you’ll realize this is no ordinary puppet show... The magic that’s usually a secret shared only among expert puppeteers is unveiled on stage as this world-class, hilarious gang of professionals does their thing right before your eyes." (stuffedandunstrung.com)


For more information about the show, or for tickets, click here.


**UPDATE** James Godwin has rejoined the cast and will be performing until the show closes on July 3rd! Go see it if you haven't already! 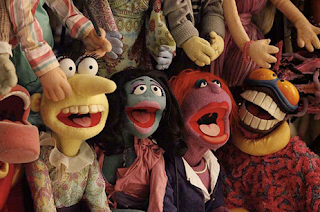