EXIT ROW: Behind The Scenes

Admit it - you were a little curious as to how the folks here at Puppet Heap rigged two paper bags to projectile-vomit.

Puppet Heaper Matthew Brennan took the time to tell us a little bit about his experience working on Exit Row. 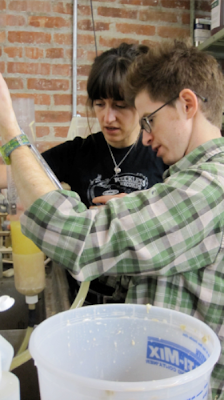 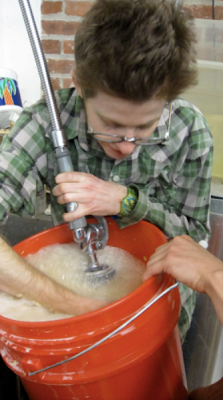 "The puke rig was a latex pump which is usually used to fill molds. They had the right amount of pressure and control to be able to spew on cue."

"After buckets of slop and slime settled overnight, we soaked oatmeal with yellow and green food coloring. But the true secret is a few drops of red. Gives the puke just the right amount of bloody, natural goodness. Soaking the oatmeal overnight made it extra slimy. We made a lot and it still wasn't enough!" 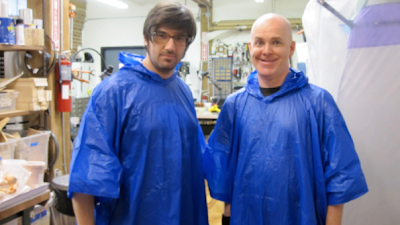 Tim Lagasse (left) and James Godwin (right) get suited up prior to their performance. 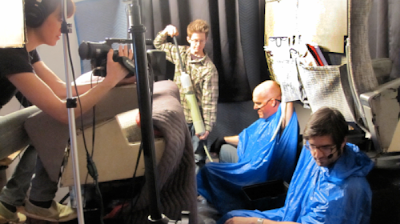 Here, the cast and crew are hard at work.

"Tim and James were in extreme waterproof gear the whole time. We covered them up pretty good but the puke still managed to get down their sleeves all day long.
They both stayed in character the whole time being completely ridiculous and hysterical. They were troopers for being thrown up upon the whole shoot. It was a treat to watch them perform." 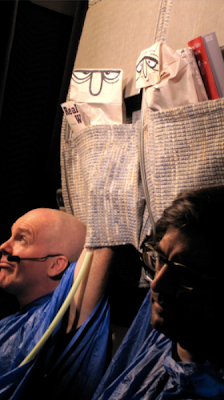 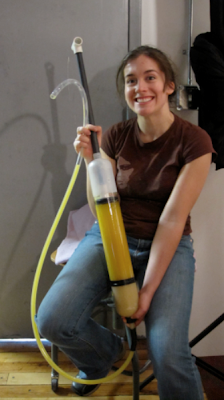 "Months of planning went in but the shoot itself took two days during a heavy snowstorm. The crew was great to work with. The Chuck and Ralph puppets are really neat to see come to life and they have so much personality for paper bags...

After every puke scene, everyone burst out [laughing] as soon as cut was called. Fake puke is always funny."

Now, without further adieu, we bring you Episode Number 10 of Exit Row.
Posted by Ariella at 10:47 AM